Quick preface to Part II, to see more photos of Seven and the Monarch life-cycle, check out the gallery.

On the morning of his release, “Seven” took awhile to fly away. First he walked around the perimeter, then along the edge of the open mesh door flap of the enclosure. He worked his wings steadily, but seemed to be in no hurry to fly. I put my right hand beside him, thinking to give him “a lift” away from the enclosure perimeter. When he stepped up onto my hand, I was not sure what to do, so I just stood there, wishing that I could take a photo with my one free hand while he walked around, continuing to flex and extend his wings. My confusion was short-lived. Within a minute or two he took a first short flight up to one of the sun-exposed wooden beams underpinning the roof of our house. Here he remained for 15-20 minutes, flexing and extending, until he took off once again, this time farther, toward a group of (invasive, aggressive, weedy) Brazilian peppertrees (Schinus terebinthifolia) in a neighbor’s backyard.

Just before reaching the top of one of the trees, Seven made a sharp 180 degree turn away from the trees, with a bird in pursuit. The bird may have been one of the towhees; I saw only its buff underbelly as it passed about twenty feet over my head. I heard its beak snap down a couple times as it tried to clamp down on Seven. By then Seven’s flight had no pattern that I could see. He flew up, down, sideways, forward, combinations of these, so quickly that he was a blur. I did my best to discourage the bird by waving my arms and shouting, although I doubt that my efforts had any impact on the outcome. When Seven dipped sideways and down into an adjacent neighbor’s yard, the bird abruptly turned and flew straight back to the tree from where it first appeared. 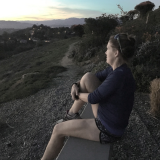